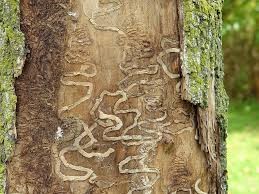 “Galleries” (Channels) made by the EAB

It’s thought that sometime in 2002, an insect known as the Emerald Ash Borer (EAB) was accidentally introduced into the United States from areas of northern China, Japan, Korea and eastern Russia via infected ash lumber used in shipping crates.  This devastating insect preys mostly on the fraxinus species, commonly known as our “ash” species, and is largely associated with heavy infestations in fraxinus americana (white ash) in the eastern United States.

The ash species are a significant component of the northern and Allegheny hardwood timber types within our region, and have been a valuable hardwood species used for a variety of purposes including cabinets, flooring, wood handles, and baseball bats.  The increase in EAB infestations across the hardwood regions of the eastern United States has been studied by the USDA Animal and Plant Health Inspection Service Department (APHIS) for a number of years, and their research has prompted many counties within a number of states to place a quarantine on moving ash logs out of their respective areas for fear of introducing this pest to unaffected woodlots.

Landowners in eastern hardwood regions should be aware of how they can detect the presence of the EAB in their woodlots and optimize the value they may still have in their ash trees.  Monitoring the condition of their ash trees for signs and symptoms of EAB is generally the first step. As long as trees are healthy and growing, and not under imminent threat from the insect, they should continue to be managed as part of any general forest management plan the landowner may have in place.   In general, though, usually within 2 years of observing EAB symptoms, the crowns of infected ash trees will show major decline, and tree death typically occurs within 5 years, but may take as few as 2-3 years (depending on how healthy the tree was before infestation).

If ash trees are found to be infested, a salvage harvest should be considered.  Emerald ash borer damage is primarily confined to the outer portions of the tree, so affected trees may still be valuable for lumber and other wood products if detected early and processed quickly.  Even if ash trees aren’t infested, if the surrounding area has positive signs of EAB presence, it might be worth considering a “pre-salvage” harvesting operation as it is almost inevitable that the insect will find any ash nearby.

Professional foresters can be of significant help in the process of monitoring, identifying and helping a landowner with managing a woodlot for EAB presence.  Foresters would also be aware of the quarantine rules that apply in any specific region, and would be able to accommodate those rules and help maximize the sale value of the ash being sold.

To have your ash trees assessed for EAB infestation, or just for general consultation about pre-emptive management steps to take, don’t hesitate to call any of our FORECON offices for advice.
We have been involved for many years now in managing ash timber in light of the EAB infestation, and can help you through any affects this harmful insect may cause you.
Contact a forester