Home » Blog Archive » For Sale: A Grand Old President (That Happens To Be a Tree)

With a trunk circumference of 40 feet and a limb spread of 153 feet, nearly the width of an entire football field, the Seven Sisters Oak is one of the largest live oaks in the United States. The term “live oak” refers to oaks that keep their leaves nearly year-round, most commonly Quercus virginiana, or the southern live oak, which is found throughout the southeastern U.S. And this tree has seen over 1200 such years!

This story of an amazing specimen comes to us thanks to our friends at the Agricultural Faculty Council, LSU AgCenter/College of Agriculture.

Up to 1,200 years old, the stately ‘Seven Sisters’ Oak has held the title for more than half a century. 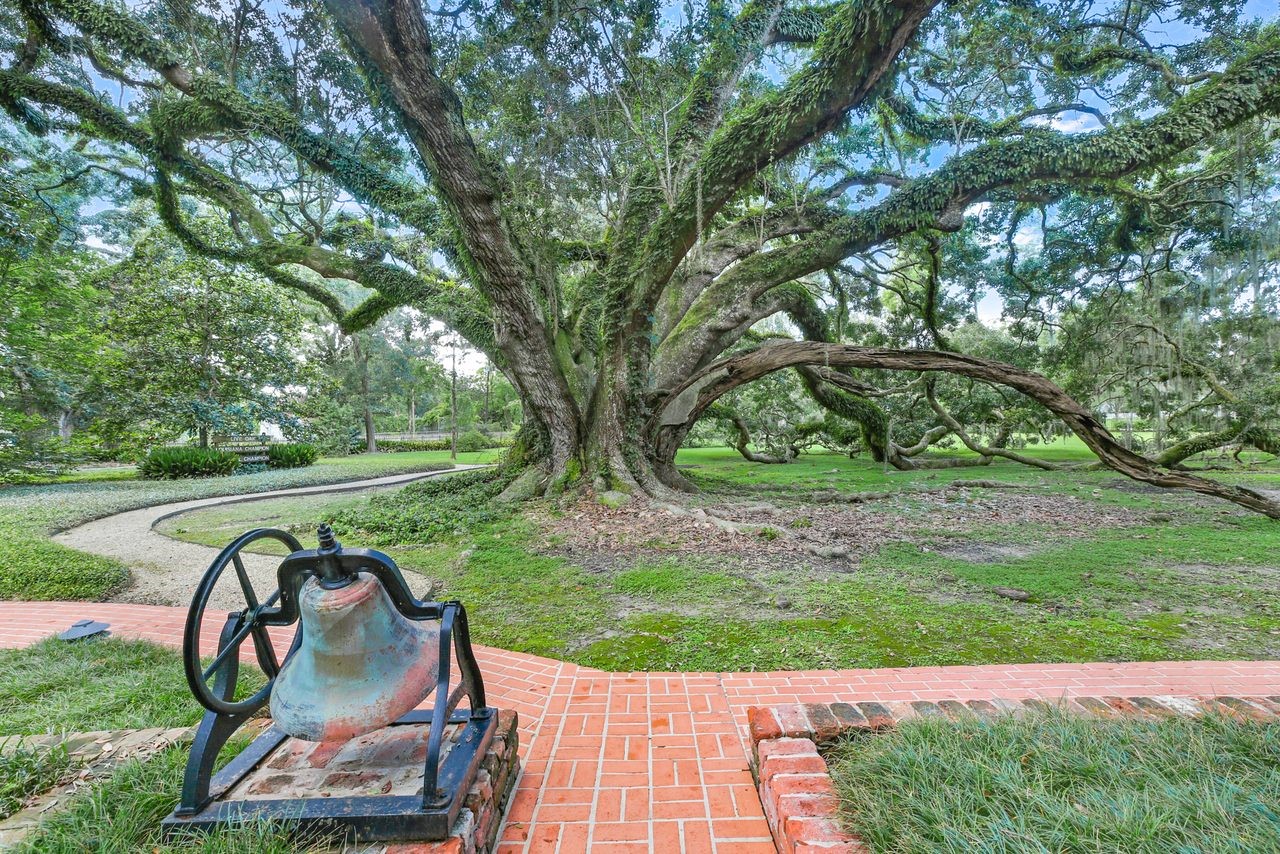 For $1.35 million, you could become the next owner of one of the largest southern live oak trees in the United States.
COURTESY NOLA REAL ESTATE MARKETING

FOR AN AUDIENCE WITH THIS president, you’ll have to drive 40 minutes north of New Orleans’s bustling French Quarter, taking the 24-mile-long causeway across the murky waters of Lake Pontchartrain. And there, off a quiet, residential street on the north shore of the lake, you’ll find its moss-covered limbs sunbathing in the humid air. This president has no oval office or international crises to manage. Its only task is to stay alive—something it has done quite well for possibly 1,200 years. Allow me to introduce the current president of the Live Oak Society: the Seven Sisters live oak tree. And for only $1.35 million, you could become this president’s next owner.

With a trunk circumference of 40 feet and a limb spread of 153 feet, nearly the width of an entire football field, the Seven Sisters Oak is one of the largest live oaks in the United States. The term “live oak” refers to oaks that keep their leaves nearly year-round, most commonly Quercus virginiana, or the southern live oak, which is found throughout the southeastern U.S.

Southern live oaks such as the Seven Sisters are hard to miss, with their massive limbs often blanketed with Spanish moss and resurrection ferns that shrivel and brown until the next rain turns them leafy and verdant again. Since 1980, the Seven Sisters oak has shared its shade with a 4,200-square-foot brick house that is currently for sale. While the house, with its large wraparound porch and three-car garage, accounts for the lot’s hefty price tag, “the draw has really been the tree,” says realtor Ginny Saxton, the property’s listing agent.

Arborist and live oak expert E.J. Dennis, who has cared for the tree for more than a decade, estimates it is at least 700 years old—and may be as old as 1,200 years, meaning it may have been an acorn during the reign of Charlemagne. While arborists often collect bore samples to date living trees, it’s a risk that Dennis, hired by the current owner to keep the tree healthy, has been unwilling to take. “If you bore a tree and count the rings, you can actually inject all kinds of viruses and fungi into that tree,” he says. A live oak “doesn’t die of old age, something has to stress it out,” he adds. More times than not, it’s human activity that’s the stressor. Such was the case with the first president of the Live Oak Society, the Locke Breaux Oak in St. Charles Parish, just west of New Orleans. That impressive oak, which was about the same size as Seven Sisters in its prime, died in 1968 as the area around it became industrialized and polluted.

After the Locke Breaux Oak’s demise at the ripe old age of 400, a new society president was needed. By then the Live Oak Society had been around for more than three decades. Edwin Lewis Stephens, president of the University of Louisiana in Lafayette, founded the society in 1934 to “promote the culture, distribution, preservation, and appreciation of the live oak tree,” according to its website. The society’s charter permits only one human member, the chairperson, at any given time. All the other members are trees.

Sometime after the society’s founding, Carole and Thomas Doby registered the oak on their property with the organization under the name the “Seven Sisters,” after Carole and her six sisters. And in 1968, their tree became an obvious choice for president. Like the Locke Breaux, the Seven Sisters was a massive, beautiful oak. “Both [trees] drank water from the Mississippi River and both lived in the state in which the society was founded,” says the society’s current sole human, Chairperson Coleen Perilloux Landry. But “some people thought [the Seven Sisters] was many trees, not just one,” says Landry—and that would not do. There could only be one president. 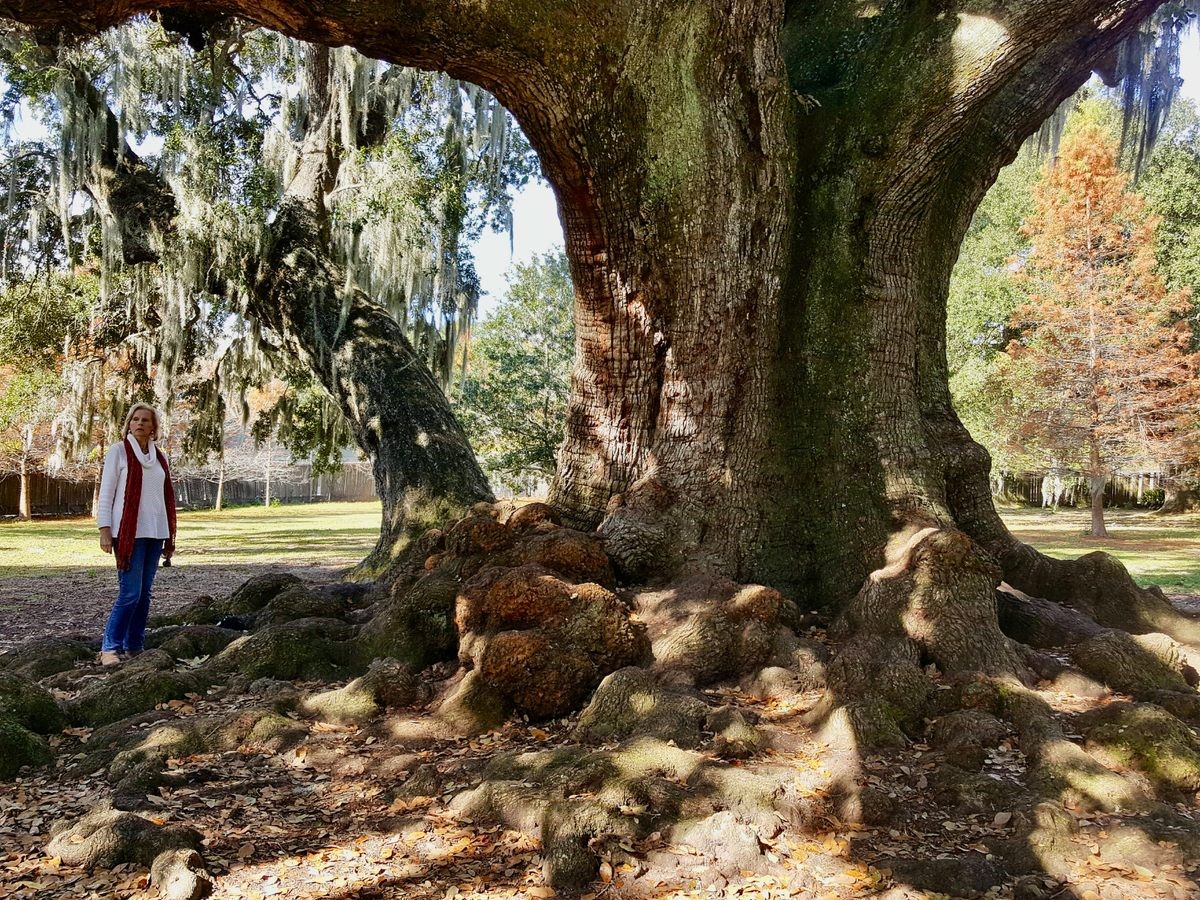 Live Oak Society Chairperson Coleen Perilloux Landry, seen here with the Etienne de Bore Oak in New Orleans,
first fell in love with the trees as a child, after her father put a swing on a live oak in her yard. COURTESY COLEEN PERILLOUX LANDRY

first fell in love with the trees as a child, after her father put a swing on a live oak in her yard. COURTESY COLEEN PERILLOUX LANDRY

“There was a big celebration” accompanying the tree’s inauguration, says the venerable tree’s current owner, Mary Jane Becker. The mayor and parish president were in attendance. A band played. There was a swearing-in ceremony—although, by all accounts, the new president’s performance was somewhat wooden.

Since then, Becker, who has owned the Seven Sisters Oak since 2006, “would have to say it’s an outstanding president.” Even so, little has changed for the massive oak since its election. “Seven Sisters just sits there being beautiful,” says Landry, adding that “people come from all over the world to see her.”

Still, it’s no small feat to live for centuries and grow as wide as a football field—even for the relatively disease-free live oak. The Seven Sisters Oak “braces itself against tragedy,” says Becker. The tree’s branches bore back into the earth on one side, buttressing itself against the fierce winds that come off the lake. Having watched the oak for more than a decade, Becker says, “it teaches you resilience, that’s for sure, in spite of difficulty.”