We never seem to have a shortage of pests in our woodlots that can substantially alter our landscapes if left to their own devices. Many of these pests (particularly insects) have migrated from overseas and are spreading throughout the eastern United States, some at a fairly rapid rate. One of the more damaging pests, in particular,  is the Hemlock Woolly Adelgid.

Our friends at Arborjet describe the Hemlock Woolly Adelgid (HWA) as “a tiny, piercing and sucking insect, unseen with the naked eye, that feeds on hemlock twigs at the bases of the needles. HWA is an invasive species from Asia which has infested the US East Coast hemlock forest from New Hampshire to Georgia, inhibiting twig growth throughout. It has also recently been found in Michigan and it is believed to be expanding its range due to changes in climate. HWA has a complex life cycle; its winter generation and spring generation overlap in the spring. It feeds and reproduces during the colder months, going dormant in the summer.”

It’s good to be able to recognize signs of any pest infestation. With the HWA, the earliest visible sign “is the presence of white, cottony masses, usually located on the twigs and at the bases of the needles. Populations tend to be denser in the lower limbs, but can be anywhere on the tree. Symptoms will progress to fading, thinning and dying limbs, with die off beginning at the base of the tree and moving upwards. Left untreated, the death of the tree is certain.”

Our Arborjet partners recommend a trunk injection of a specialized insecticide using a tree I.V. system or a micro-injector. The tree I.V. system is designed to work effectively with the hemlock’s “primitive tracheid vascular system; it injects high volumes of product under low pressure, resulting in efficient uptake. The micro-injection system works best with low volumes of applications in hemlock, and takes only minutes to apply. The products used are formulated to supply essential nutrients to support foliar development without added nitrogen, which could exacerbate HWA infestations.” 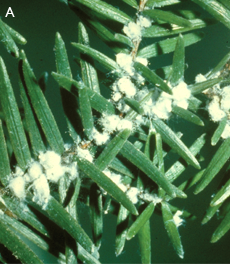 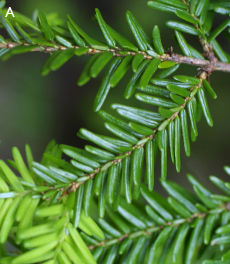 When to Treat for Hemlock Woolly Adelgid Infestation

Timing is almost everything. Generally speaking, the best seasons for injection are typically fall and spring, as “uptake occurs when trees are transpiring. The environmental conditions that favor uptake are adequate soil moisture and relatively high humidity. Soil temperature should be above 40 degrees F for trunk injection. Hot weather or dry soil conditions will result in a reduced rate of uptake, so trees should be watered if applications are made when soil is extremely dry.”

What to Expect After Treatment

“Adelgid mortality occurs after ingestion, generally within 14-28 days, and continues for up to 2 years. Cottony masses remain for some time, but will turn a distinctive gray color. Hemlocks respond positively to treatment with a resumption of twig growth.”

FORECON is well-equipped to assess, prescribe and administer the necessary treatments to help preserve your hemlock trees from the ravages of the HWA. Please contact us to discuss your situation and develop the proper plans to slow or eliminate the HWA from doing damage to your valuable hemlock trees.