After a short hiatus we are happy to get back to reporting on hardwood lumber trends within our operating regions of New York, Pennsylvania and West Virginia.  The elephant in the room which has been influencing most of the actual and perceived direction of our hardwood markets – trade and tariff talks with China – has been sitting there awhile, not moving much.  Talks have continued between the two countries – some have been quite promising, and some have not.  A few experts believe that China may be reaching a point where they would be compelled to negotiate in good faith with the US as their economy is suffering in general.  Others believe that China’s traditionally authoritative approach to internal crises will be to ignore any short-term effects of the current tariff issues on their population and continue to apply market pressure on the US.

It’s hard to discern any semblance of improvement out of all the conflicting reports we hear from analysts and pundits alike, but it is interesting to note that as of mid-October, the official negotiators for each side are reporting  success in making progress in resolving this crisis, and in its October 25, 2019 edition, Dan Meyer (Editor of the Hardwood Weekly Review) states that “there is growing optimism – and evidence – that an agreement of some sort (known as Phase 1) will be signed during the Asia-Pacific Economic Cooperation (APEC) summit in Chile in mid-November.”

The recent negotiations resulted in the decision by President Trump to call off his planned tariff increase “from 25% to 30% on $250 billion in Chinese imports that was scheduled to go into effect” just a few days after their mid-October session.  This was received well by the Chinese and our stock market (though that fluctuates daily, but as of this writing is almost at its all-time high point again).

There is certainly more to the tension between the US and China than just trade issues (intellectual property theft, etc.).  As mentioned above China is itself struggling with its economic dynamics internally and many are saying that even if China and the US completely resolve these trade issues, it is unlikely that we will see the same level of robust Chinese demand that we witnessed in the first half of 2018.  Even so, any resolutions regarding the current trade dispute would be a good thing for improving our current market position, and with that there has been indication that other global markets (particularly Vietnam and Thailand) are improving.  We will continue to report the constantly fluctuating situation as best we can.

Highlights of the Appalachian Hardwood Lumber Markets – as of October 31, 2019

Regional and local scuttlebutt has been interesting.  Despite indications that some mills are truly struggling, others are staying busy and some are reacting to spot demands that exceed their current supply.  The Hardwood Weekly Review reports that distribution yards continue to report “rather strong business, and a molding producer said that, while business has been flat, it is not declining.”

There is still Chinese demand for kiln dried ash and a NY mill reports that the shipping of this product has been steady and significant.  In other areas, ash quality is waning quickly due to worms and rot related to EAB attacks.  Cherry continues to suffer low demand and a few mills are kiln drying what they would otherwise sell as green lumber only because they don’t know what to do with it right now.  However, one producer has apparently reported that they are able to sell unselected cherry on a regular basis to a specific source that they have.  Hard maple demand is either up or down depending on whom you talk to.  The overall price index has only shown a slight decline in price over the last few months, and some mills report that sales of thick stock have been good.  Soft maple remains the most sought-after species in general based on reports we’ve seen and the folks we talk to.  Some mills are stating they are getting more than the published prevailing rates; other mills have the demand but are short on supply. Red oak seems to be on the same glide path as cherry, though the pricing in the southern Appalachian region seems to have leveled.  White oak demand seems split between products markets, where the barrel stave markets are hot, and the other more mainstream markets are not so much – however, the stave market has offset the traditional market somewhat as both national and international demand for various whiskies continue to increase.  Poplar has seen some slight declines over the last few months, but overall has been one of the steadiest species during this past year (HWR Oct 25, 2019).

We have decided to change the normally reported graphs to a new format, showing the lumber price trends for the usual selected species over various time frames (weekly, year-to-date and one year). 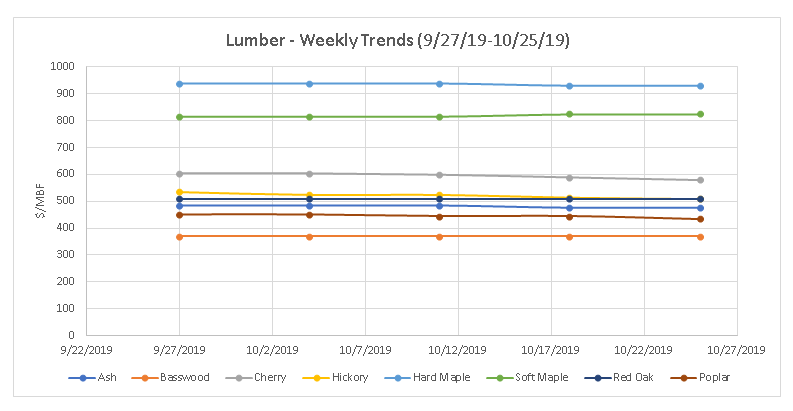 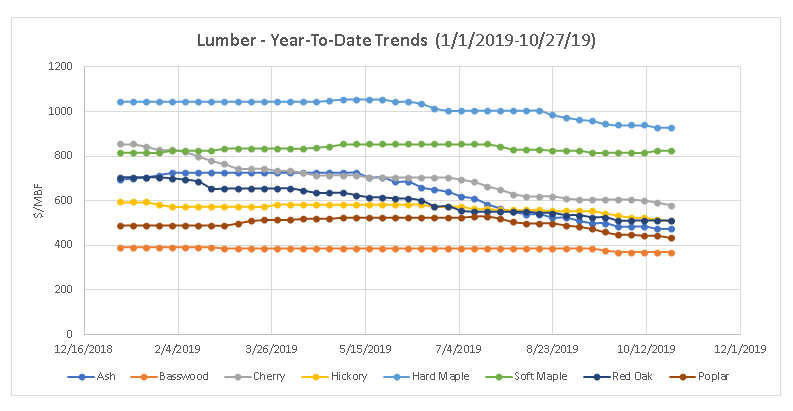 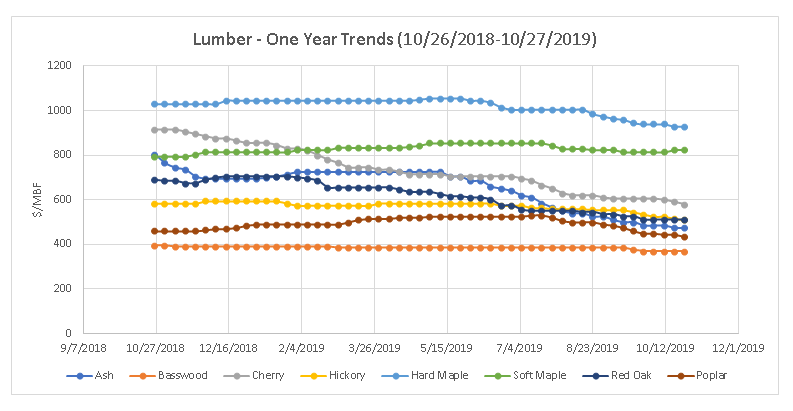 Even though markets are challenging right now, we strongly believe that landowners can still benefit from sound, professional advice from foresters who know the local market specifics.   Please call any of our foresters if you are interested in selling your timber – you will be glad that you did!

The Cortland & Falconer, New York Offices, and the Titusville, Pennsylvania Office of FORECON, Inc. are looking for looking for highly-motivated Forest Technicians.